Home » REGIONS » Limpopo Valley » Steenbok in winter
Back to Category Overview
Total images in all categories: 11,019
Total number of hits on all images: 5,657,605 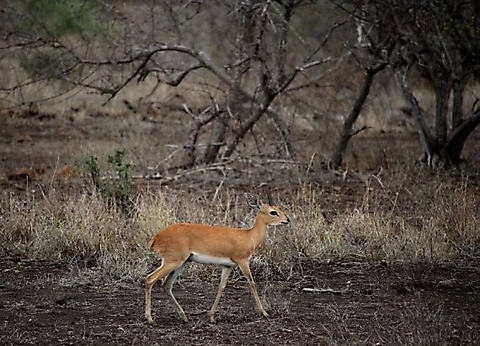 The steenbok, scientifically known as Raphicerus campestris, is found widespread across southern and east Africa. It is a small antelope with rufous or fawn to somewhat orange-brown coat, short tail and white on stomach, chin and around the eyes.

Standing 50 cm tall at shoulder height, the single lamb born among bushes weighs less than 1 kg. The female eats the placenta, minimising the scent that attracts predators. Only the male has horns, straight, parallel and sharp, sure to be used in defence. Bleating is only heard when the animal is stressed.

Steenbok browse as well as graze. Apart from leaves and grass they eat roots, bulbs, fruit and flowers. They favour open, flat savanna-like terrain covered in grass with some shrubs. Steenbok drink water, but often receive sufficient moisture from their food not to seek it.

Nocturnal activity is less than diurnal, particularly resorted to near human establishments and in the dry season when dew accumulates on the edible vegetation at night.

Solitary, apart from during the mating season, steenbok of both genders mark their territory with urine, dung and a secretion from a gland beneath the chin. This is the only antelope that scratches soil over its dung and urine as cats do.